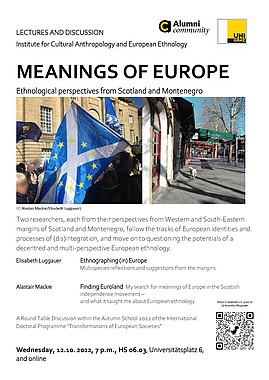 Lectures and Round Table Discussion

Two researchers, each from their perspectives from Western and South-Eastern margins of Scotland and Montenegro, follow the tracks of European identities and processes of (dis)integration, and move on to questioning the potentials of a decentred and multi-perspective European ethnology.

Ethnographing (in) Europe
Multispecies reflections and suggestions from the margins

In the discipline of European Ethnology, “Europe” often seems to form a blurry and also uncontested horizon of research projects which mostly explore local German-speaking contexts. As a given frame of contextualization, this “Europe” is also rarely deconstructed in its West-European-Centrism. Thinking from the margins, based on multispecies ethnographic experiences in contact zones between humans and straying dogs in the southeast European city Podgorica, I suggest in this input - inspired by Utz Jeggle - a re-capture of the ethnographic dimension 2.0 and opening up “Europe” on a topological and conceptual dimension as an actual field for and subject of ethnographic research.

Following Brexit, symbols and narratives of Europe have become common in the Scottish independence movement and are often aligned with their Scottish equivalents. While researching meanings of Europe within the movement, I explored whether Europe is an ideology, nothing more than a strategy in a high-stakes political debate, or if its meaning can be found hidden in local experiences. Reflecting on my own journey of discovery of both ethnology and Europe in the context of disintegration, I will argue for a creative ethnology of Europe which aims to connect the local and the European; and is mindful of their common futures.